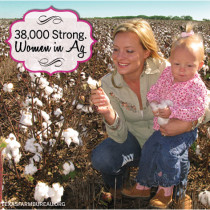 Women farmers have a growing role in Texas

While agriculture has long been considered a man’s arena, women are stepping up and taking a more active role on Texas farms and ranches.

From 2007 to 2012, the number of women operators grew by 10 percent, bucking the national decline. That’s more than 38,000 women operating farms in the Lone Star State.

And it’s more than any other state in the nation.

Farmer. Rancher. Or both. It’s another title and job they don’t take lightly.

But they also play a part in agricultural leadership, businesses, science and communities. Reaching out to fellow farmers, moms and elected officials. Working to build the future of Texas and America.

They’re the beating heart of Texas farms and ranches.

And they’ll continue to play a critical role in our country’s agricultural future.