A traditional Thanksgiving meal will cost Texans more this year as the prices for staple foods and specialty items are on the rise.

Shoppers can expect to pay over $50 for the holiday feast for a family of 10, according to a survey conducted by the American Farm Bureau Federation (AFBF).

“I think we’re all noticing the higher prices at the grocery store, and Thanksgiving items aren’t excluded from those increases,” Texas Farm Bureau President Russell Boening said. “There’s more demand for Thanksgiving foods this year compared to last year during the height of the COVID-19 pandemic.”

Leading the cost at the cash register is the turkey, the centerpiece for many tables, at $23.99 for a 16-pound bird.

Farm Bureau shoppers checked prices between Oct. 26 and Nov. 8, which is before many grocery store chains began their turkey markdowns for Thanksgiving. Although the survey timeline is consistent with past AFBF Thanksgiving surveys, 2021 brought some unique differences. According to USDA Agricultural Marketing Service data, grocery stores began advertising lower feature prices later than usual this year. Also, the average per-pound feature price for whole frozen turkeys was $1.07 the week of Nov. 5-11 and 88 cents the week of Nov. 12-18, a decline of 18% in just one week. This means consumers who have not yet purchased a turkey should be able to find one at a lower cost than the Farm Bureau average.

The shopping list for Farm Bureau’s informal survey includes turkey, stuffing, sweet potatoes, rolls with butter, peas, cranberries, a veggie tray, pumpkin pie with whipped cream, coffee and milk, all in quantities sufficient to serve a family of 10 with plenty for leftovers.

“Although the overall Thanksgiving meal cost to consumers increased this year, farmers and ranchers aren’t seeing the higher prices for the food products they produce,” Boening said. “Farmers and ranchers are also facing supply chain issues and higher costs for seed, fertilizer, equipment, parts and more. Inflation is certainly adding to the cost of all products in the U.S. economy right now, not just food products.”

In recognition of changes in Thanksgiving dinner traditions, the Farm Bureau price survey also includes ham, Russet potatoes and frozen green beans, in an expanded holiday menu. Adding these foods to the classic Thanksgiving menu increased the overall cost by $15.41, to $68.72. This updated basket of foods also increased in price (up 14%) compared to 2020.

This year’s national average cost was calculated using 218 surveys completed with pricing data from all 50 states and Puerto Rico. Farm Bureau volunteer shoppers, including some from Texas, checked prices in person and online using grocery store apps and websites. They looked for the best possible prices without taking advantage of special promotional coupons or purchase deals.

The AFBF Thanksgiving dinner survey was first conducted in 1986. The informal survey provides a record of comparative holiday meal costs over the years. Farm Bureau’s classic survey menu has remained unchanged since 1986 to allow for consistent price comparisons.

Click here for more information on Texas prices available from TFB’s past Thanksgiving Meal Reports. The Texas surveys, however, did have some differences in food items surveyed. 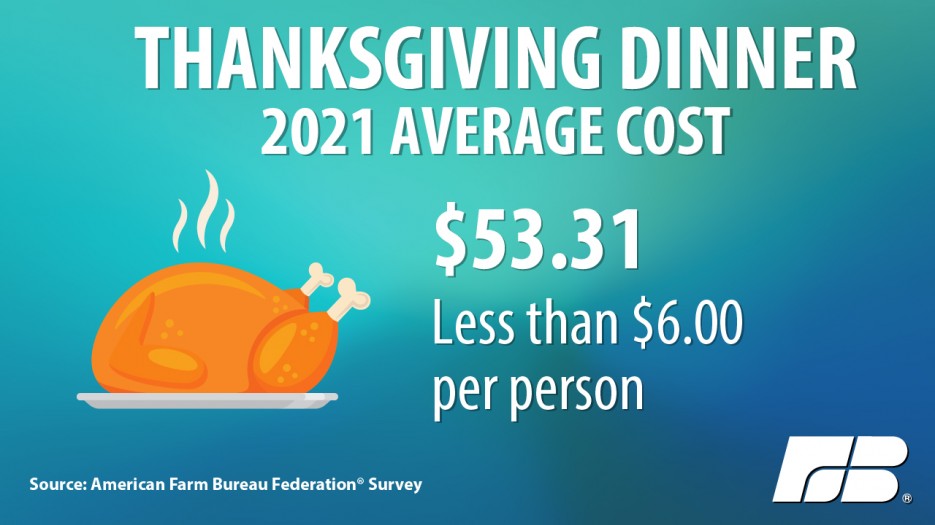 This year’s Thanksgiving dinner for 10 will cost $53.31, according to the American Farm Bureau Federation’s 36th annual Thanksgiving Survey.