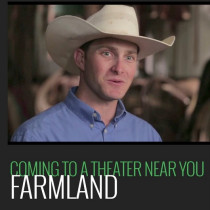 Farmland to tell the stories of farmers, ranchers, food production

(WACO, Texas)–A new film that gives Texas families an opportunity to take an up close and personal look at how their food is grown and the people who grow it will debut in early May in five Texas cities.

Farmland, a documentary film by Oscar and two-time Emmy-winning filmmaker James Moll, follows six young farmers and ranchers who have taken over the family business of growing and raising food for families across the nation and world.

Brad Bellah, a sixth generation cattle rancher from Throckmorton, Texas, is featured in the 90-minute documentary.

“We encourage all Texans to see this captivating documentary,” Texas Farm Bureau (TFB) President Kenneth Dierschke said. “It takes an intimate look at the hard work and sacrifice that these young men and women put into farming and ranching. It exposes the passion that thousands of people across this state have each day as they set out to grow our food and fiber.”

“Farmland wasn’t just made for the agricultural community,” Dierschke said. “It was made to help everyone see what is involved in growing the foods we eat.”

Ticket and theater information for Farmland can be found on FarmlandFilm.com.

The documentary was produced by Allentown Productions with generous support from the U.S. Farmers and Ranchers Alliance (USFRA).