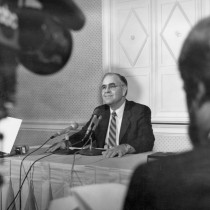 WACO, Texas—S.M. True Jr., 88, of Plainview died today in an accident on his Hale County farm. True led the Texas Farm Bureau, the state’s largest farm organization, from 1982 to 1993.

“We’ve lost one of the giants in the history of Texas agriculture,” said Kenneth Dierschke, current TFB president. “He had a unique ability to bring people together and work out consensus on the most controversial of issues.”

True also served on the American Farm Bureau Federation (AFBF) Board of Directors and received AFBF’s Distinguished Service Award and the Meritorious Service Award from Texas Farm Bureau. He was named to the State Fair of Texas’ Heritage Hall of Honor in 2002. He also served on the Texas Beef Council (TBC) Board of Directors, including a term as TBC president, and was a member of the Cotton Board.

“S.M. True has left a towering legacy at Texas Farm Bureau,” Dierschke said. “Serving the farm and ranch families of Texas was his passion. He was still doing that as long as he lived.”