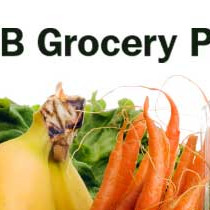 The items of a Fourth of July cookout include two pounds of center loin boneless pork chops, a salad with lettuce and tomatoes, long-grain rice, pinto beans and Blue Bell Homemade Vanilla ice cream for dessert.

“Independence Day is a time when families and friends gather together to celebrate our great nation, and our celebrations usually include a cookout or meal,” said TFB President Kenneth Dierschke. “An American family of four can enjoy a full meal for less than $20. That’s a testament to just how affordable food is here in the United States.”

The second quarter results of TFB’s Grocery Price Watch record a total balance of $44.66 for a basket of produce, meat, grains and dairy products. This is a 0.71 percent decrease from $44.98 in the first quarter of 2012 and down 0.11 percent from $44.71 during the same period last year.

Of the 16 items surveyed, seven decreased in price from the first to second quarter, while nine items either increased or remained level. Shoppers will find the most savings on pork chops (down 13.43 percent), Blue Bell Homemade Vanilla ice cream (down 7.56 percent) and Kraft cheddar cheese (down 6.04 percent). The largest price change came from fresh grapefruit, which increased 31 cents per pound.

“Americans are fortunate to have access to an abundance of affordable fresh fruits, vegetables, meats and other products grown right here in the United States,” Dierschke said. “The quality of the American food supply is one of the many things that make this country great.”

The TFB Grocery Price Watch is conducted quarterly by volunteer shoppers at grocery stores across the state of Texas. The current survey data was collected by 42 shoppers from June 13-20, 2012. TFB has monitored Texas food prices through its Grocery Price Watch survey since March 2009. 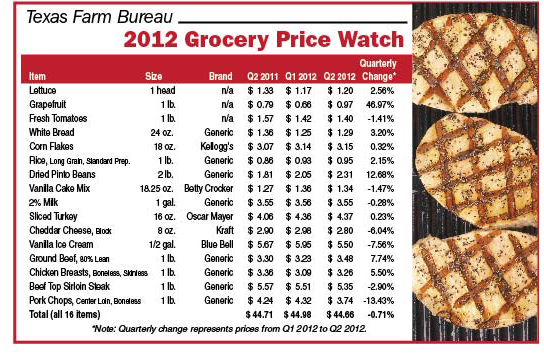