The first quarter survey results recorded a total balance of $46.43 for a 16-staple item basket including produce, meat, grain and dairy products. It’s a decrease of more than 2 percent over last quarter and 5.32 percent compared to this time last year.

“Grocery prices affect all Texans, including farmers and ranchers,” TFB President Russell Boening said. “Our survey shows a trip to the grocery store is costing consumers less than a short time ago.”

Boneless, skinless chicken breasts were the only protein to see a price increase in the first quarter. The slight increase was less than 1 percent, for a total of $3.36 per pound.

“Texas-grown grapefruit and citrus are harvested during the first few months of the year, making them an affordable and nutritious option,” Boening said.

The TFB Grocery Price Watch is conducted quarterly by shoppers strategically located across the state of Texas. The current survey data was collected by 42 shoppers from March 3-10, 2016. TFB has monitored Texas food prices through its Grocery Price Watch survey since March 2009. 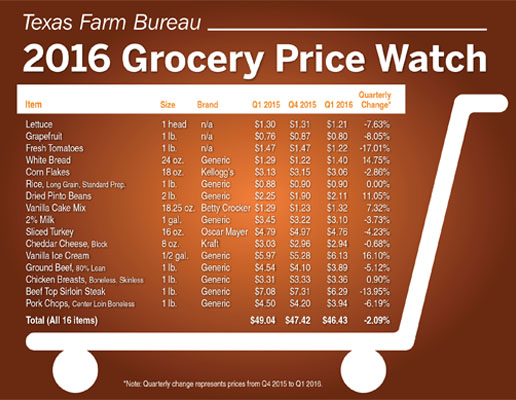