WACO, Texas—Texans saved 64 cents on a basket of 16 staple food items at the beginning of 2012, as compared with prices in the fourth quarter of 2011, according to results of the latest Texas Farm Bureau (TFB) Grocery Price Watch survey.

The first quarter results of TFB’s Grocery Price Watch record a total balance of $44.98 for a basket of produce, meat, grains and dairy products. This is a 1.41 percent decrease from $45.62 recorded in November 2011.

“Grocery prices affect all Texans—from suburban families to farmers and ranchers themselves,” said TFB President Kenneth Dierschke. “We are pleased to see that Texas consumers are paying fairly moderate prices at the grocery store.”

Shoppers looking for fresh produce paid less for grapefruit, lettuce and tomatoes. These items posted the largest savings from last quarter at decreases of 28.1 percent, 8.2 percent and 5.7 percent, respectively.

“Texas-grown grapefruit and citrus are excellent choices this time of year,” Dierschke said. “Citrus fruit is harvested during the first few months of the year, making it a very affordable, nutritious and tasty option for growing families.”

Of the 16 food staples surveyed, 10 items either decreased in price or stayed the same, while the remaining six items increased in price from last quarter. Compared to the end of 2011, the food products that noted increases were slight—all under a 5 percent increase with the exception of chicken breasts, which increased 9.6 percent from $2.82 per pound to $3.09 per pound.

The Grocery Price Watch results show only a $1.03 annual increase in the basket, from $43.95 in the first quarter of 2011 to $44.98 in the same period this year. A 2.33 percent difference, shoppers did not experience the 5 percent jump in food prices that was predicted.

“All last year, we heard about an anticipated spike in grocery prices. For consumers, a 5 percent increase would have really hit budgets hard. Thankfully, prices were not as high as some had expected,” Dierschke said.

TFB’s Grocery Price Watch is conducted quarterly by volunteer shoppers at grocery stores across the state of Texas. The current survey data was collected by 35 shoppers from March 28-April 4, 2012. TFB has monitored Texas food prices through its Grocery Price Watch survey since March 2009. 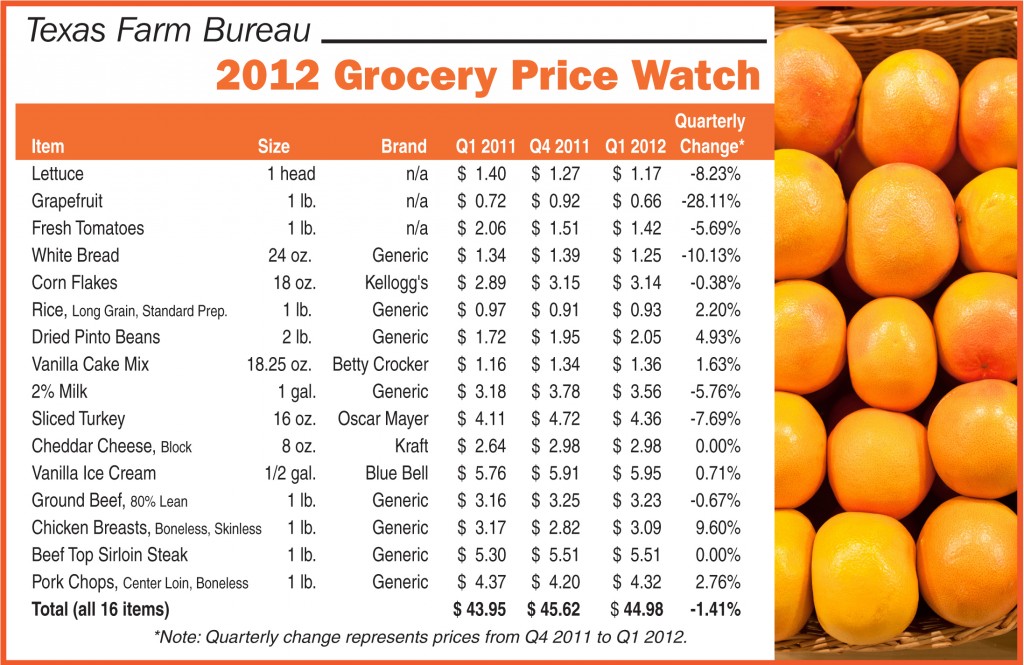