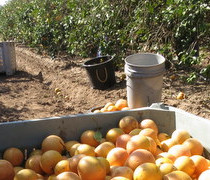 (Washington, D.C.)—Farmers and ranchers from across the nation, including a dairyman from Texas, urged Congress to take action to fix the nation’s broken immigration system this morning at the National Press Club in Washington, D.C.

“I need Congress to act to fix the broken immigration system–the sooner, the better,” Texas Farm Bureau (TFB) State Director Russell Boening said. “After years of avoiding the issue, some Republicans in Congress now say they support reform–just not this year. That might make sense politically, but it’s disastrous for my business.”

Boening owns and operates a dairy and a farm south of San Antonio. He recounted the difficulty farmers and ranchers have in finding reliable employees willing to do the hard work necessary on a farm and dairy.

“Lacking certainty, farmers and business owners are hesitant to invest, and that means less growth and fewer jobs, including fewer jobs for Americans,” Boening said. “I work hard to recruit American workers.”

Immigration reform isn’t something that can be put off, according to Boening. He said business owners, farmers and ranchers, and the nation as a whole need Congress to act.

The event, “Fruits of Labor: Farmers’ Case for Immigration Reform,” was hosted by the Partnership for a New American Economy and the Agriculture Workforce Coalition.