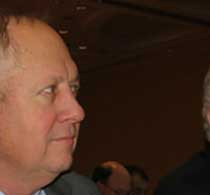 Nashville, TN—Policy which allows development of a program to keep boll weevils out of Texas, with cooperative control efforts in Mexico, was pushed through the American Farm Bureau Federation (AFBF) business session by the Texas Farm Bureau (TFB) delegation today.

Introduced by TFB District 8 State Director Neil Walter of Coryell County, the new policy gives direction to AFBF to work with other agricultural groups to drive the weevil deeper into Mexico. This would establish a barrier to the entrance in South Texas and the rest of the United States, where the weevil has been mostly eradicated. Before eradication efforts, boll weevils cost Texas and U.S. farmers millions of dollars annually.

Walter compared the weevil effort to screwworm eradication in the 1960s, which pushed the devastating cattle pest out of the United States deep into Central America.

“A united effort from agricultural groups could eliminate the threat of this cotton pest once and for all,” Walter said.

The TFB delegation was also successful in tweaking crop insurance policy that is more friendly to Texas farmers, passing a resolution to prevent caps on crop insurance assistance to farmers.

Because of the huge risks in farming, the federal government assists farmers with premiums on crop insurance, which pays when crops are devastated by drought or flood. However, caps on that assistance would handicap larger farms that must insure more crops on more acres.

“It gets to where farmers can’t afford it,” said Ricky Yantis, a TFB delegate from Lamb County. “Bankers require it. It’s impossible to farm without crop insurance.”

TFB Vice President David Stubblefield said it was a good session for Texas farmers and ranchers.

“Our delegates were aggressive in pushing policies important to Texas farmers and ranchers, and working with other state delegations,” Stubblefield said. “Those policies provide guidance to the American Farm Bureau Federation as they work to influence legislation and regulations on the national level.”