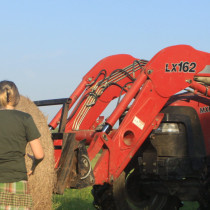 WACO, Texas – A nationwide grassroots movement—including efforts from Texas farm families—resulted in the Department of Labor withdrawing a proposal that would have restricted youth activities on farms.

Dierschke said the participants in Texas Farm Bureau’s Leadership Development programs, AgLead and FarmLead, worked the issue on Capitol Hill as well, along with the grassroots efforts of thousands of farm families across Texas and the nation.

“We are encouraged to see the administration listen to the voices of farm and ranch families,” Dierschke said. “This victory belongs to those who stood up and made their concerns heard and serves as another example of what we can accomplish together.”

The Labor Department withdrew its proposal in response to an outpouring of thousands of comments from concerned citizens. The ruling would have limited the ability of youth to operate farm equipment, and be employed by non-family members.

“Texas Farm Bureau understands safety is an issue, and a responsibility,” Dierschke said. “But working in agriculture gives youth the opportunity to learn responsibility and the value of hard work. It also assures a future generation of farmers and ranchers to grow food and fiber for America.”