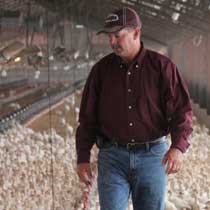 (WACO, Texas)—One Texas farmer will be part of a team to help bridge the gap between agriculture and consumers who are hungry for more information about their food.

Darrell Glaser of Rogers was named one of the U.S. Farmers & Ranchers Alliance’s (USFRA) Faces of Farming and Ranching, following a nationwide search and online voting process.

“It’s exciting to be able to share the story of farming and ranching with others,” Glaser said. “It’s our responsibility to reach out and answer consumers’ questions, and I look forward to connecting with those who have an interest in their food and agriculture.”

The Milam County farmer will do just that throughout the next year. He, along with four other farmers and ranchers, will share the story of agriculture on a national stage through consumer-facing public appearances, media interviews and events.

As part of the process, consumers, farmers and ranchers were asked to vote online for whom they believed best represented agriculture. In addition to the public vote, a panel of judges interviewed and evaluated the finalists to help determine the second class of Faces of Farming and Ranching.

Glaser owns and operates Bar G Ranch with his wife, Shannon, four sons and his mother. They run an integrated contract turkey brooding operation alongside a cattle operation. They brood nearly 600,000 turkeys each year and maintain a Beefmaster herd of 200 mother cows.

Erin Brenneman of Iowa, Jay Hill of New Mexico, Thomas Titus of Illinois and Carla Wardin of Michigan also will speak on behalf of agriculture.

For more information on the Faces of Farming and Ranching program, visit www.fooddialogues.com/Faces.