Shoppers save 4 percent from last quarter, according to TFB’s Grocery Price Watch

WACO, Texas—Texas shoppers can save on summer grilling essentials—including a hamburger, chicken breast or pork chop—according to the latest Texas Farm Bureau (TFB) Grocery Price Watch survey. The total cost of the 16-item grocery basket was $44.55, down from $46.40 last quarter.

“One of Texans’ favorite summer pastimes is grilling,” said TFB President Kenneth Dierschke. “Good deals on meat make it easier to serve up a delicious, affordable meal for your family.”

Food prices have held steady compared to the second quarter of 2012, as well, with the sample grocery basket totaling 11 cents less this year.

“Although some of our own Texas farmers and ranchers still are experiencing difficult drought conditions, our neighbors in the Midwest have enjoyed more rain this year. Extra moisture has made our nation’s corn, wheat and other crops flourish. That has helped level out commodity prices, which trickle down to consumers,” Dierschke said. “Many of the items in our Grocery Price Watch basket reflect those savings.”

The TFB Grocery Price Watch is conducted quarterly by volunteer shoppers at grocery stores across the state of Texas. The current survey data was collected by 41 shoppers from June 6-13, 2013. TFB has monitored Texas food prices through its Grocery Price Watch survey since March 2009. 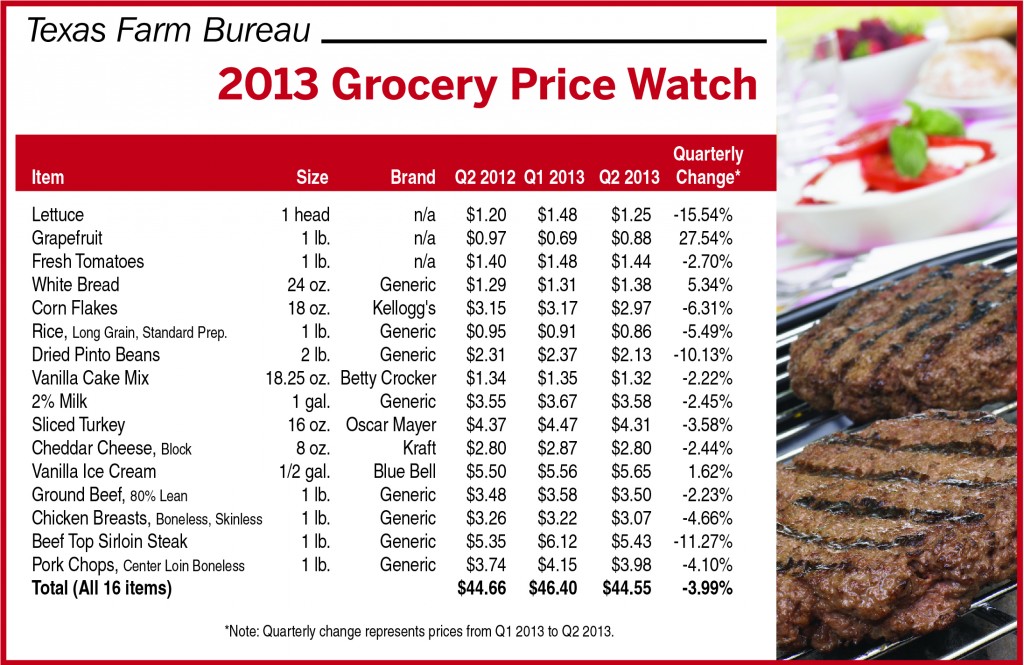