WACO, Texas—Predictions last year that drought in Texas and the Midwest would eventually force food prices higher became reality in the first quarter of 2013, according to the latest Texas Farm Bureau (TFB) Grocery Price Watch survey.

“Food prices finally caught up with the drought’s devastation,” said TFB President Kenneth Dierschke. “It’s been a tough go for Texas farmers and ranchers, and consumers now are feeling the pinch.”

The total cost of the 16-item basket surveyed was $46.40, an increase of nearly 5.5 percent from results reported in November 2012. The largest increases were in beef, as the price of lean ground beef rose more than 10 percent from last quarter to $3.58 per pound and sirloin steak was up nearly 19 percent at $6.12 per pound.

“Ranchers in Texas and across the U.S. have struggled to maintain their herds in the wake of this record drought,” Dierschke said. “Without rain, pastures did not grow and there was not enough grass to feed the cattle. Many ranchers had to decide whether or not to sell their herds and get out of ranching altogether. Today, the nation’s cattle herd is the smallest since the 1950s.”

As ranchers sold their cattle last year, more beef came into the market and the price of beef remained low. Now that cattle supplies are low, retail prices are increasing at the grocery store.

Other factors like continued drought in the Midwest and higher gas prices have led to an increase in the overall cost of the food basket from the fourth quarter of 2012 to the first quarter of 2013. Of the 16 items surveyed, 13 increased in price from the last quarter: lettuce, fresh tomatoes, corn flakes, rice, dried pinto beans, cake mix, milk, sliced turkey, cheddar cheese, ground beef, chicken breasts, sirloin steak and pork chops. Only three items—grapefruit, white bread and vanilla ice cream—decreased in price from the last quarterly survey.

The TFB Grocery Price Watch is conducted quarterly by volunteer shoppers at grocery stores across the state of Texas. The current survey data was collected by 40 shoppers from March 7-14, 2013. TFB has monitored Texas food prices through its Grocery Price Watch survey since March 2009. 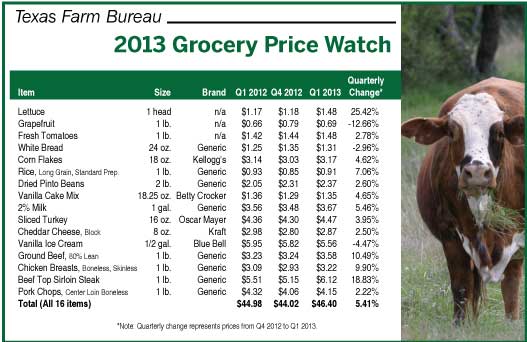