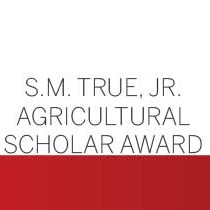 “The late S.M. True had a passion for agriculture,” said TFB President Kenneth Dierschke. “This new scholarship in his memory seeks students who share that devotion.”

The TFB board of directors has established the $20,000 S.M. True, Jr. Agricultural Scholar Award to honor his commitment and dedication to Texas agriculture.

The scholarship will be presented annually to one recipient who is classified as a junior and enrolled in a four-year college or university. To receive the full amount, the recipient must continue to major in agriculture and maintain a satisfactory grade point average.

Applicants must be a member of a TFB family with continuous membership for at least three years at the time of application. In addition, a completed application and two letters of recommendation—one from the county Farm Bureau president and one from the dean or head of the agriculture program department of the applicant’s college or university—are required.

True served as president of the Texas Farm Bureau from 1982 to 1993 and had a passion for improving the lives of his fellow farmers and ranchers. He was a believer that Farm Bureau was the organization that best represented agriculture because of its grassroots orientation.

“Since his passing in 2012, the Texas Farm Bureau board of directors has been exploring different avenues to honor Mr. True for his many years of dedicated service to the organization and Texas agriculture,” said TFB Executive Director Vernie Glasson. “This prestigious scholarship is a fitting tribute to his leadership, positive attitude and spirit of optimism.”

Applications are due in the state office April 30.