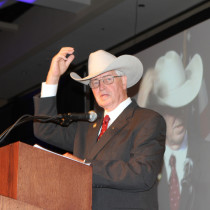 Texas Farm Bureau (TFB) President Kenneth Dierschke has announced he will not seek reelection in December as the head of the state’s largest farm organization.

“Thank you for the trust and confidence you placed in me to lead this great organization for the past 12 years,” Dierschke told the TFB board of directors on July 30 at their quarterly meeting. “It has been an honor to serve the members of Texas Farm Bureau as we work together to be the true Voice of Agriculture in the Lone Star State.”

The farm leader will retire at the conclusion of the TFB annual meeting on Dec. 8 in Corpus Christi. A new president will be elected by voting delegates at that time.

“Most notable was topping the 500,000 mark in membership,” Glasson said. “It was President Dierschke’s dream and commitment that kept us driving toward that goal.”

Another Dierschke vision was the addition of the TFB Conference and Training Center. Although the center is set up to handle TFB training and meeting needs, the basement is hardened to withstand major disasters, including the most powerful tornadoes.

The San Angelo grain and cotton farmer’s 12 years as president are the most as TFB president in 57 years. Glasson said Dierschke’s leadership will be missed by Farm Bureau leaders, staff, members and others involved in agriculture throughout the state and nation.

“Texas Farm Bureau is strong—membership, financially and politically—because President Dierschke laid a foundation for success during his dozen years at the helm,” Glasson said. “We will continue to build upon it.”

Click here to listen to President Dierschke's reflections on his service as Texas Farm Bureau President.