The 2012 report shows a decrease of $2.61, or 5.36 percent, from the 2011 TFB Thanksgiving Meal Report. The survey records the cost of 10 holiday staples—including turkey, stuffing, sweet potatoes, cranberry sauce and pecan pie—to feed a family of 10 people.

“Thanksgiving is a special time for us to gather around the table, enjoy the company of our family and friends, and reflect on the things for which we are grateful,” said TFB President Kenneth Dierschke. “Texans are sensitive to prices at the grocery store, especially as we prepare large holiday meals. We give thanks for the farmers who ensure Texans can serve their families a well-balanced meal at an affordable cost.”

This is the second consecutive year for an increase in pecan prices, as shelled and halved nuts were up 18 percent from 2010 to 2011 and up 4.4 percent from 2011 to 2012. Higher pecan prices mean a more expensive pecan pie—a Texas tradition—to round out Thanksgiving dinner.
Texans will pay less for six of the Thanksgiving staples this year: young tom turkey, frozen (down 8.66 percent); sweet potatoes, fresh (down 12.9 percent); cranberry sauce, canned (down 2.31 percent); cubed stuffing, herb seasoning (down 5.96 percent); brown and serve rolls, 12 per package (down 26.75 percent); and 9-inch pie shells, frozen (down 9.70 percent).

In addition to pecans, three other survey items increased in price: green beans, frozen (up 5.63 percent); whipping cream (up 3.75 percent); and whole milk, gallon (up 0.52 percent). 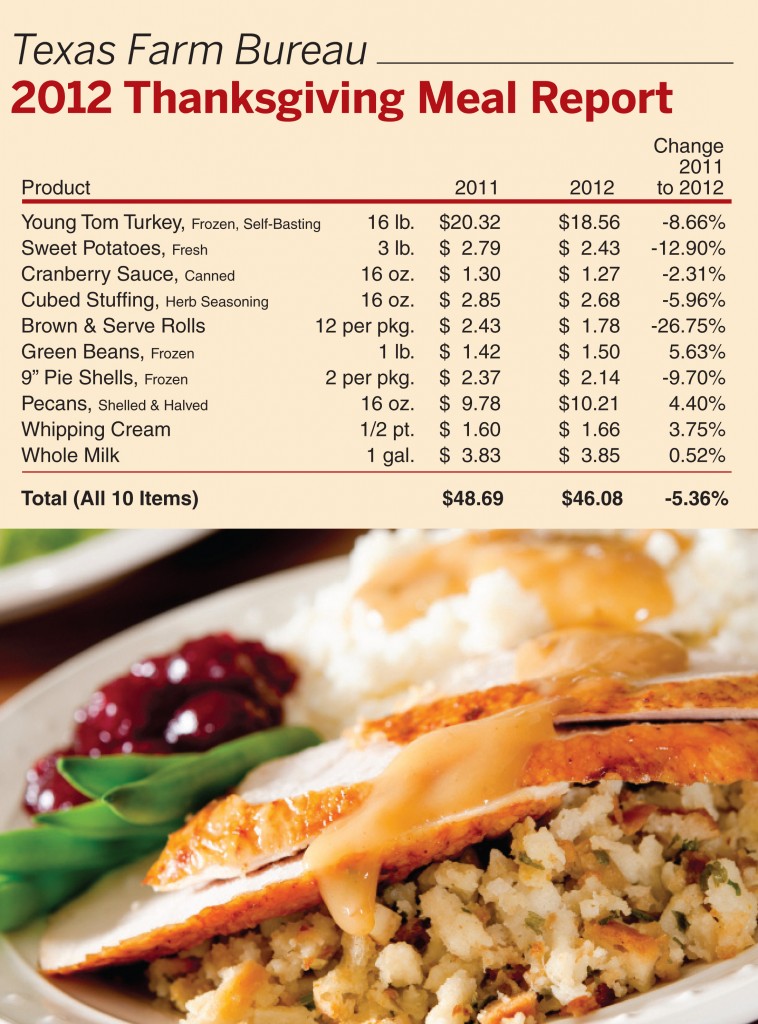 Note: Click here for a high-resolution file of the 2012 Thanksgiving Meal Report chart.