(FRISCO, Texas)—One farming couple has planted their roots deep in the North Texas soil. Passion and drive, combined with innovation, has paid off for Layne and Jamie Chapman of Vernon.

“Innovation and determination are key to cultivating a life on the farm,” TFB President Russell Boening said. “The challenges of farming can be intimidating, especially for young farmers. It hasn’t stopped Layne and Jamie, though. They’ve faced droughts and volatile markets, yet they’re determined to keep growing their future in agriculture.”

The Chapmans grow irrigated and dryland cotton, corn and wheat in Wilbarger County.

Weather extremes, like the drought of 2011, made Layne rethink the way he farmed.

The fifth generation farmer continually looks for ways to improve the land and conserve natural resources—practices that make sure the land will continue to grow crops for future generations.

For the Chapmans, that future is always in the view. They’re open to new practices, ideas and technology. But their family is their driving force.

They have one son, Jaxon, who is soaking in all there is to see, touch and do on the farm. A passion for agriculture is already taking root.

Together, they’re raising a family and cultivating a life on the farm.

For Layne, the years spent growing up between the cotton stalks sparked a passion for agriculture. It’s one that’s grown with their family and one they enjoy sharing with their community.

The couple is involved in their church and volunteers with numerous local organizations.

Layne is also vice president of Wilbarger County Farm Bureau. The couple participates in Farm Bureau activities on the county and state level. They served on the TFB YF&R Advisory Committee and chaired it in 2015.

“The Outstanding Young Farmer & Rancher competition recognizes farmers between the ages of 18 and 35 for their dedication to Texas agriculture,” Boening said. “This year’s contest highlighted some of the best young farmers and ranchers in our state. They each look for ways to diversify and be innovative as they care for the land, their families and their communities.”

As winners of the Outstanding YF&R contest, the Chapmans will represent Texas at the national competition in January.

They’ll also receive the title to a 4x4 Ford pickup truck with a diesel engine, courtesy of Texas Farm Bureau Insurance Companies, and a $5,000 cash award, courtesy of Farm Credit Bank of Texas.

Other finalists in this year’s competition include Ryan and Santanna Bay of Gatesville and Braden McInnis of Tennessee Colony.

The two runners-up will receive a $500 cash award, courtesy of Southern Farm Bureau Life Insurance Company, and a power tool, courtesy of Grainger. 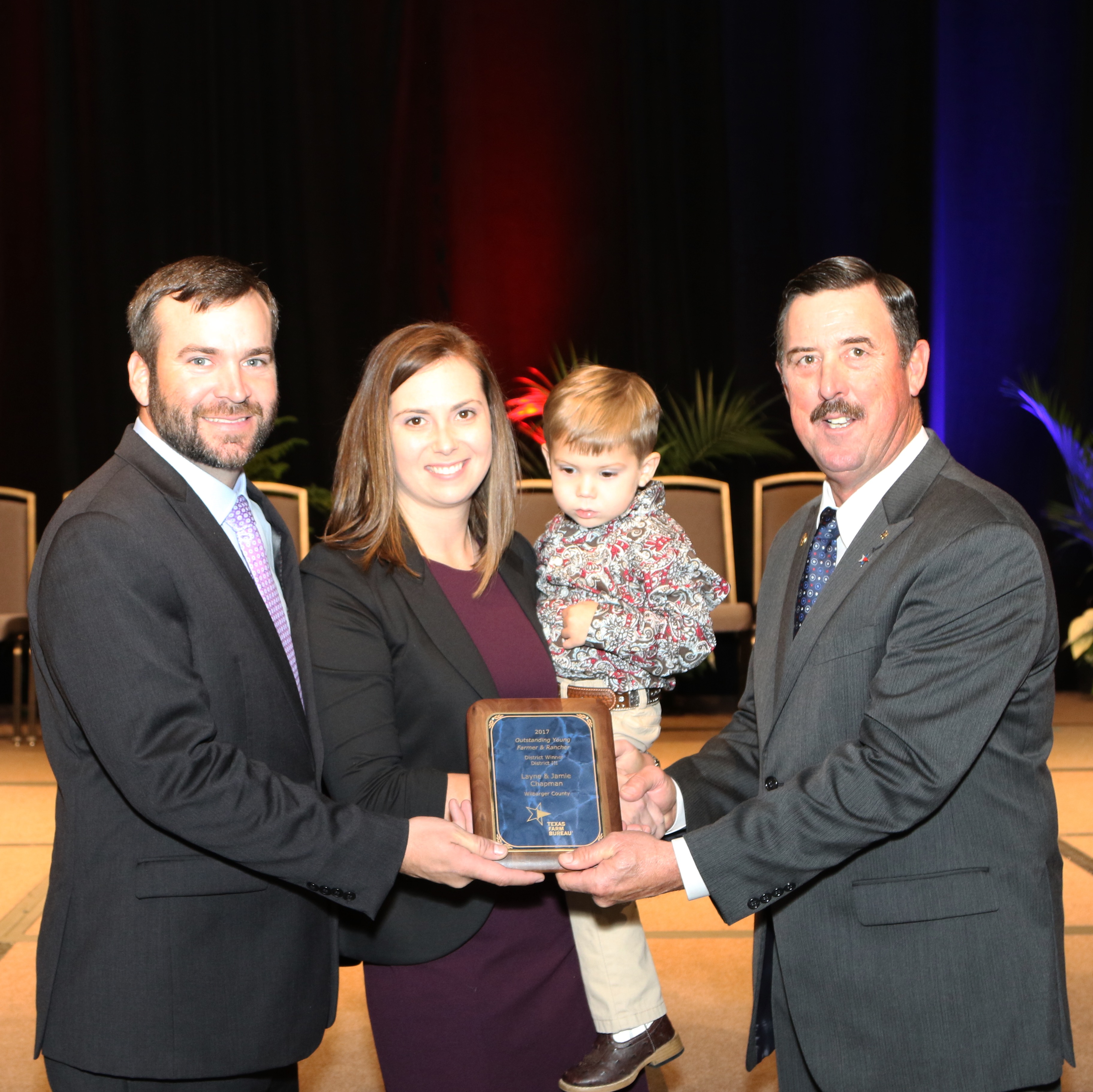 Layne and Jamie Chapman of Vernon are the winners of the 2017 Texas Farm Bureau Outstanding Young Farmer & Rancher contest at the organization’s 84th annual meeting in Frisco.