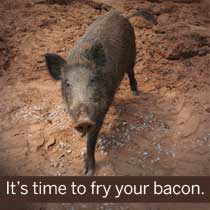 That’s good news for Texas farmers and ranchers who are being overwhelmed by two million feral hogs.

The calamitous critters are found in 230 of 254 Texas counties and cause an estimated $52 million in damages to crops, hay fields and pastures in Texas alone.

Hunting and trapping have barely put a dent in the population. Now scientists are looking at a preservative used to cure bacon to do the job.

Called sodium nitrite, it's toxic to hogs but not to people. It's used in New Zealand and Australia to kill feral swine and scientists say it may be the best solution in the U.S.

Unlike people and domestic animals, pigs make very low levels of an enzyme that counteracts the chemical. They eat enough sodium nitrite and they become uncoordinated, lose consciousness and die.

There are still challenges ahead with using this targeted toxin but scientists are working at it.

It can’t be soon enough though to stop the rampage through Texas farmland from these swine of mass destruction.