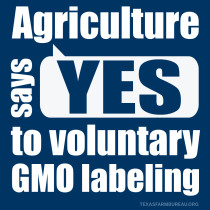 This week, the U.S. Senate will consider a bill to voluntarily label products of biotechnology or GMOs. Farmers and ranchers are recommending a “yes” vote. Genetically modified products are a politically charged issue, though scientists overwhelmingly vouch for their safety.

What farmers fear is a patchwork, pieced together state regulatory system, like the one slated to go into effect in Vermont. That would make it very difficult to grow crops in one state that are sold in another. Such a system would not only be difficult, but expensive–involving separate storage and inspection.

Nearly everyone agrees that organic agriculture works pretty well. Producers and sellers of organic products voluntarily label for any market advantage that exists. People who want organic buy it, usually paying more. Those who care about price buy the conventional product. Research shows that both ways are safe.

We need a GMO labeling system that works the same way for equally safe products.