Posted on Mar 28, 2016 in Featured, Your Texas Agriculture Minute 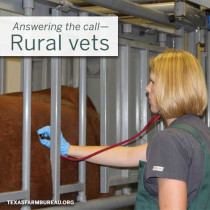 Texas is home to more food and fiber animals than any other state. What it sorely lacks are veterinarians to help care for these animals.

It’s a serious issue. So much so that Texas Tech University wants to build a new veterinary school in Amarillo. It would be a four-year school with some accelerated track opportunities.

Texas A&M University knows the situation. Its College of Veterinary Medicine is dipping into and partnering with four of A&M’s satellite campuses in rural areas. It hopes to draw more students to College Station who might be interested in returning to the towns where they grew up.

The ideas from Tech and A&M are good. Incentives for graduates would also help. Financial or other incentives could increase the number of large animal vets. Also, select new students who will pursue food animal practices.

It’s time to deliver for rural Texas. Veterinarians to work alongside Texas agriculture are past due and needed now.