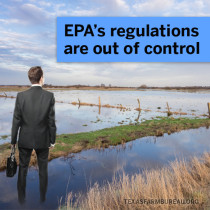 There is a billboard in Washington state that says “unregulated agriculture is putting our waterways at risk.” The statement is nonsense. To claim agriculture is unregulated is like saying Steph Curry doesn’t have a three-point shot. Agriculture faces an avalanche of federal and state regulations.

The ad is paid for by a group funded by EPA. That violates the agency’s rules, but EPA itself is often out of bounds.

They’ve played so fast and loose with the law that it seems like half the nation is suing them. Many farmers worry the latest Waters of the U.S. rule is so arbitrary that it can vary from day to day and inspector to inspector.

EPA shamelessly engaged in lobbying and public relations in support of the rule. When it comes to deep pockets, there is nothing quite like the federal government. Farmers and landowners can’t match that in protecting their property rights.

Congress and the courts have both said no to this rule–more than once. It’s time to rein in EPA.