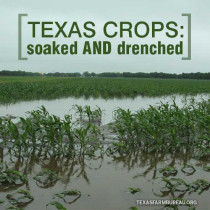 Most of the Lone Star State has seen a deluge of rain the last few days.

And the forecast? More rain.

Those clouds hold the future of this year’s crops. The continuous rains—and the flooding that comes with it—spell trouble for some Texas farmers.

Two inches to nine inches. Some received more. Some less. It leads to a soggy, boggy mess in the fields. Keeping many farmers out and delaying planting in parts of the state. That leads to another set of problems—planting deadlines and less mature crops facing insect and heat pressure later in the summer.

And for those who’ve already planted their crops? Many had to replant. Now some may contemplate a third attempt to get—and keep—the crop in the ground.

But others will take a gamble. Hoping the crops will make it. And yield a bountiful harvest.

Add this to the already bleak outlook for commodity prices, and Texas farmers are facing a tough year. One that will test their faith and future.