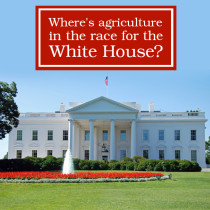 Would it be too much to ask for the presidential candidates to give us a clue about their plans for the American food supply? After all, the ability to feed ourselves is vital. More than 16 million jobs are dependent on agriculture.

Yet, I can’t recall anything other than a few badly misguided thoughts on trade, which is important. Most of those ideas range from foolish to a catastrophe.

The farm bill was written in 2014 by an overly optimistic Congress during a good time for agriculture. Now the bad times have arrived and there is no safety net. Some of us fear a 1980s replay. Family farmers could be forced off the land and we can’t spare many. That seems worthy of presidential attention.

Agriculture is under attack by foolish intentions on the right to gut crop insurance. Family farmers are also under siege by a clueless, but aggressive, army of regulators on the left.

Mr. or Madam Potential President, we’d like to hear from you about this.