Posted on May 16, 2016 in Audio, Editorial, Featured, Your Texas Agriculture Minute 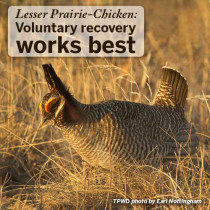 Is the Endangered Species Act turning the corner?

Got any lesser prairie-chickens? There was a time when a farmer being told his land was home to an endangered species or habitat for that species was a nightmare. A range of punitive federal regulations severely limited the ways a farmer or rancher could use his property to make a living.

It’s still not good news to learn you are in the crosshairs of a very powerful U.S. Fish and Wildlife Service. Agriculture has learned to work with the government on these issues to preserve habitat and the interests of farmers.

The Obama administration recently withdrew its appeal of a federal court decision to vacate the 2014 listing of the lesser prairie-chicken. The judge had said voluntary plans that are part of the bird’s habitat were not properly considered and that the listing was unwarranted.

There are rumors that the government is regrouping and still plans to list the bird. But, that word “voluntary” has a nice ring to it. Carrots are better than sticks.