Posted on May 23, 2016 in Audio, Editorial, Featured, Your Texas Agriculture Minute 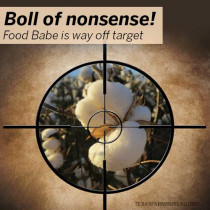 My father used to say, “Some folks don’t know what they’re talking about—others don’t even suspect it.”

Vani Hari, otherwise known as the Food Babe, is stepping ever further into that dubious territory. Well known for her misinformed attacks on food problems that are not problems, Hari now has her sights set on cottonseed and cotton farming. Her diatribe follows a well-trod path of misguided activism.

It’s a curious mix of slight truth, half-truth, known inaccuracies and pseudo-science. There is a cute segue into an attack on biotechnology. This is an old and apparently profitable game for Hari. Meanwhile, responsible journalism continues to explode the myths surrounding GMOs. A few minutes of open-minded research will prove my point.

Serving food with olive oil, cottonseed oil or any oil is a choice. There doesn’t have to be anything sinister about it.