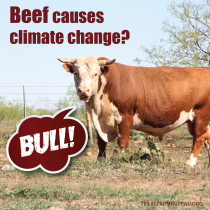 It’s very fashionable these days to attack meat as a carbon-generating threat to the environment. Cows, and people, do pass gas. As with all mammals, this natural activity produces methane, a greenhouse gas.

The staggering majority of greenhouse gases are due to internal combustion engines and manufacturing. Some think that if we stop raising livestock, we can use all that land to grow kale and bean sprouts.

The thing is, on much of this land, grass is about all that will grow. All cattle eat grass for most of their lives. Some are finished with grain in feedlots. With livestock, we harvest grass for human consumption.

Then there is the misleading fact that cattle consume a lot of water. Do you really think that rainfall captured in Throckmorton, Texas to water livestock affects water supplies in Southern California? Really? I don’t either. Regional droughts and rainfall patterns are part of the story.

Eating meat is a choice–free of climate guilt.