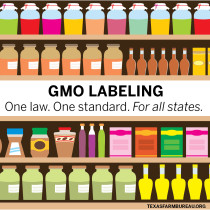 After years of debates and arguments, Congress made a historic decision. One that resulted in a labeling law for GMOs. That law labels ingredients from a process that has nothing to do with safety or nutrition. But if it puts an end to the nonsense, then it’s worth it. And it does stop ill-informed state legislatures from throwing up a series of unworkable laws based on emotion and misinformation.

The anti-GMO forces pushed hard for a warning label. But no evidence of danger exists. Their fear tactics didn’t work.

Food science and biotechnology are vital to deal with issues like malnutrition and blindness in children all over the world. They also help our farmers, ranchers and consumers right here in the U.S.

The argument will likely go on, but it’s now clear all the important stuff is settled. Perhaps it’s wishful thinking this will be the last time I’ll have to write about it.