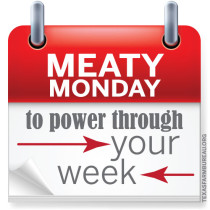 Following a long tradition of attacks on animal agriculture, Oprah Winfrey tweets to her millions that she is embracing the nonsense of Meatless Mondays. There is a relatively small number of ranchers. I suppose a cheap shot at America’s ranching families is low risk.

If you’ve looked into it, you know there is nothing in the way of evidence to suggest that reasonable portions of meat are unhealthy, no matter which day you eat it. In fact, meat remains the best way to get protein in the diet. You can, of course, achieve that in other ways if you work at it.

I wish I could buy the world a burger but I’m used to the idea that pop culture loves silly ideas and statements–especially about the food choices of others. I like More Meat Mondays and Beef Taco Tuesdays. My statement for this Monday is four flat iron steaks on the grill. Four really good reasons to ignore Meatless Mondays.