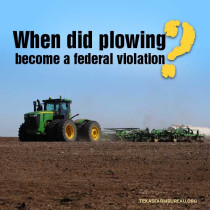 Standing up to the bully

When did plowing a field become a federal violation? John Duarte, a fourth generation California farmer, has taken a stand against the federal government over whether farming is breaking the law.

Duarte is in court with federal regulators over the act of plowing. For that, he faces fines of $8 million. His legal costs are already in the millions. Duarte is making a stand for all farmers and ranchers. He asks the entire agricultural community to stand with him.

Under the Clean Water Act and because he has standing water near some of his fields after rains, Duarte is under attack. He has a mortgage on 450 acres and a court order not to farm it. His soil, due to regulatory slight-of-hand, has been labeled a pollutant.

An even tougher version of the Clean Water Act is under court challenge and every farmer in America has a stake in stopping an out-of-control federal regulator.

Duarte says EPA wants to make an example of him. He says, “We need to stop them before they make farming a federal offense.”

Duarte explains more on the issue on his GoFundMe page.