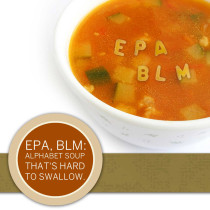 Private property abuse is hard for Texans to swallow

There are two very different possible intrusions on the rights of Texas landowners in the news recently.

One is an attempt by EPA through a reinterpretation of the Clean Water Act. Under that new rule, if adopted, EPA could basically regulate anything that gets wet–a ditch on your land or a field that might have standing water after a rain. In short, EPA could tell you how to farm.

The other is a direct seizure of land along the Red River. The Bureau of Land Management (BLM) is apparently going to lay claim to some 90,000 acres that are deeded to Texans, had taxes paid on by Texans, and farmed and ranched by Texans for generations.

Both cases are hard for Texans to swallow. Over 98 percent of the land in Texas is privately owned. We don’t need or want the federal government taking our land or abusing our rights.

Texas farmers and ranchers are going to solve this problem through the courts, through Congress, our state government and the court of public opinion.

Sometimes, EPA and BLM, when you bite off more than you can chew, you end up gagging. Welcome to Texas.