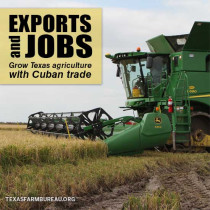 You may soon be able to buy a famous Cuban cigar in the U.S. Their rum, produced from the sugarcane crop will soon be in the U.S., too. This is due to recent changes in regulations by the Obama administration. And, U.S. agriculture will have a shot at the Cuban market.

A trade embargo was imposed by the U.S. on Cuba in the early 1960s. With the goal of forcing Fidel Castro from power, and with a few changes along the way, trade with Cuba has been prohibited. The embargo has been pretty much a failure.

Now, things have been loosened up a bit. There are those who believe giving the Cuban people a taste of American prosperity is the best way to promote freedom in Cuba. There are questions about how much Cuba can afford to buy, but lowering the barriers might be a positive first step. Only Congress can remove the embargo completely.

Nearly all the rice consumed in Cuba in the 1950s was grown in Southeast Texas. It would be nice to compete for that market once again.