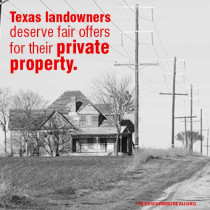 Eminent domain: One more chance to make it fair

Many Texas landowners are fighting a lonely battle with adversaries who have a much bigger stick. That’s eminent domain in Texas. The government must sometimes take private property for public use.

But, many private companies in Texas also have eminent domain authority–including pipeline companies and other utilities. What happens when that company, with a bottom line mentality, offers less than half of what you know your land is worth? It’s a troubling decision. Take it to court and maybe win–with a huge legal bill at the end of it–or take the low ball offer. This might be a farmer, rancher or a retiree, living out the dream of a place in the country.

A group called Texans for Property Rights is calling on the Legislature to pass a law requiring property takers to pay court costs when they lose in court. It’s fair and it’s time.

The U.S. and Texas constitutions are clear. Property takers must make a good faith offer and try to make the landowner whole. Public good was never meant to ride on the backs of property owners.