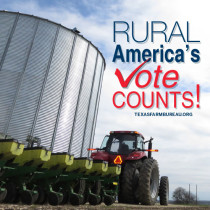 One of the reasons Donald Trump will move into the White House on Jan. 20 is that he ran up huge vote margins in rural areas. Rural leaders have long been concerned that national leadership is ignoring the countryside and the people who live there, concentrating on huge urban voting blocks. In the 2016 election, the folly of that strategy came home to roost.

These are places where issues like property rights, overregulation and the second amendment are a lot more than talking points. It’s where an out of control federal agency like EPA can ruin your life and livelihood.

That rural folks can make a difference at the polls is now quite obvious.

There is talk of Texas talent joining the new administration. Some attention to the concerns of rural America is long overdue. Perhaps Texans can be part of real solutions.

Some have described this electoral result as a national divide between rural and urban. It doesn’t have to be. If the nation is to move forward, all of it will have to be included.