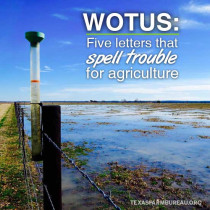 Did you know the mud puddle in front of your barn is perceived as a potential environmental threat? Did you know plowing could be a federal crime? According to WOTUS, the EPA proposed Waters of the United States rule, the answer to both questions is yes.

Having won the Big Green battles long ago, EPA is now down to “little green,” chasing tiny or nonexistent gains in environmental quality by imposing five-figure a day fines on farm families for acts such as plowing or building a dam.

Ignoring both Congress and the courts, EPA seeks to impose its will everywhere, angering advocates of private property rights. WOTUS is enjoined by a judge during yet another court battle. President-elect Trump has said there is too much regulation in agriculture. No wonder rural America turned out for him.

Rolling back an overly aggressive EPA would be one campaign promise he could check off the list, and earn the gratitude of farmers.