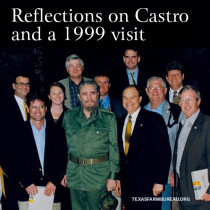 A night with Castro

It was September 1999 and I was privileged to be part of the first outreach of an American farm organization to Cuba. President Clinton had pried the door of the embargo open just a little bit.

Our delegation had met with everyone who counted in Cuba except Fidel Castro himself. On our last night, it did not seem like it would happen. But then it did. We were taken to the National Palace for that meeting at about 11 p.m. We stayed all night, leaving at 5 a.m.

Our group included a congressman, Texas rice industry officials and Texas rice farmers. Castro was charming and gracious. I reminded myself of political prisoners locked up not far away and, of course, the Cuban Missile Crisis, played out when I was a terrified 8-year-old child.

Cuba has potential as a neighbor and trading partner, but communism is the one obstacle it will never be able to overcome. Castro’s sins should be buried with him as both sides look forward to a better day.