Posted on May 5, 2014 in Audio, Editorial, Featured, News Releases, Your Texas Agriculture Minute 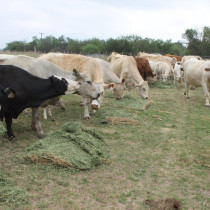 If you’re like me, you love the great taste of beef and you are probably wondering why prices are climbing higher.

The picture—painted in the brown hues of an ongoing drought—becomes remarkably clear when you use the recently released 2012 Census of Agriculture as a guide.

The drought intensified during the period of the most recent census, 2007 to 2012. As a result, ranchers had to cull their herds and Texas cattle numbers dropped drastically from 13.7 million to 11.2 million.

So cattlemen are getting rich, right? Hardly. They have fewer head to sell and costs to keep their remaining cows fed have soared.

It’s a wash for cattlemen, which is something the whole state needs. Good rains will eventually allow ranchers to solve the supply problem, but first they have to fall. Replacing two and one-half million head of cattle will be quite a chore in anyone’s book.

In the meantime, we’ll be paying a little more for beef. But keep in mind that we’re also supporting a business with a heritage as rich as the Lone Star State.