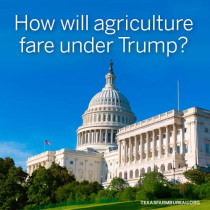 Will regulators be held accountable under Trump?

There’s an old story of a police department chasing a criminal into an abandoned building. Not having enough men to surround the large structure, they instead surrounded the building next door.

Farmers and ranchers, under administrations of both parties, have often felt like the building next door, with targets on their backs they don’t deserve.

Farmers share the same concern for the environment felt by all Americans and have, in fact, taken many positive steps with technology and action.

But in the current administration, especially the EPA, the zeal for regulating has stepped beyond reason with the Waters of the U.S. rule and other measures. There is a cost for that. Economic growth still lags. Agriculture and business have begged for relief.

President-elect Trump says he’s listening. We’ve imposed heavy regulation with little regard for cost or effectiveness. Is it different this time? We’ll see.