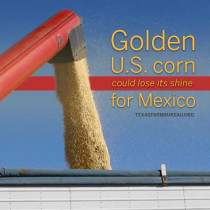 Trade responds to both political and economic forces. If a country has options other than buying our stuff, we have to persuade them to purchase American.

Mexico is threatening to retaliate because of the talk of tariffs on goods they sell to the U.S. They ship things like vegetables, oil, clothing and machinery to Americans. With a tariff, all of that would cost consumers more.

Mexico will most likely retaliate with corn–a foundation stone of the American farm economy. American farmers sent $2.4 billion of corn to Mexico in 2015. In 1995, the first year of NAFTA, corn exports to Mexico were only $391 million.

Do they have to buy from us? No, they don’t. There’s lots of corn around the world. They may have to pay more, but a high tariff would take away that advantage.

The current spat with Mexico comes at a time when U.S. farmers face the fourth consecutive year of declining income. A trade war? We can’t afford it.