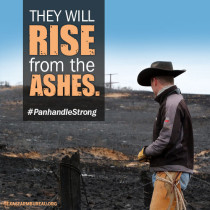 It’s born with a spark, often accidental and feeds on grasses dried by wind. It’s a wildfire—a destroyer of life and property that often cannot be outrun or outflanked. It’s a monster. Ravenous, aggressive and deadly.

2017 has brought the worst wildfire season in 11 years to the Texas Panhandle. People have died. Many thousands of head of livestock have been lost. A major agricultural disaster has been left behind.

Hay deliveries to the Panhandle arrived in large numbers. In a week’s time, the support of fellow ranchers has already helped meet the need for feed. But fencing materials, and miles of it, are still needed. Monetary donations can be used to help fill that demand.

Texas Farm Bureau has also organized a fund for tax deductible contributions. Visit texasfarmbureau.org for more information on the fund and a list of other ways to help those in need.