Posted on May 19, 2014 in Editorial, Featured, News Releases, Your Texas Agriculture Minute 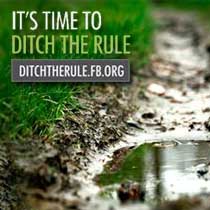 It’s not that I don’t trust the EPA…well actually, I don’t. Since the inception of the Clean Water Act, the law has said that it applies to “navigable waters of the United States.” EPA wants that to extend to every mud hole and drainage ditch in all the land. EPA failed in Congress and the courts. Up next? Bureaucracy!

The exemptions EPA says farmers have actually only apply to dredge and fill activity. There’s not much of that in agriculture. If you extend the law to cover land that isn’t even wet most of the time, you have the power to veto even routine farming decisions.

EPA, in effect, says, “We are the government…trust us.” West Virginia poultry farmer Lois Alt knows about that. She faced millions in fines because residue, including manure, blew as dust by fans on her farm. Some of it came in contact with rainwater. Alt won in court, but nothing here inspires trust.

Create a giant federal agency. Fund it lavishly. What it will do then is regulate…aggressively.