Posted on May 8, 2017 in Audio, Editorial, Featured, Your Texas Agriculture Minute 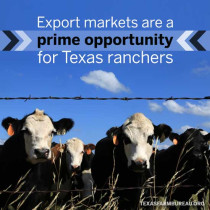 Supply and demand—it’s the oldest marketing strategy in the book. And it’s working in favor of American ranchers, because there’s a growing demand for U.S. beef in foreign countries.

After 13 years, the first shipment of American beef hit the Brazilian marketplace. It’s a promising long-term economic opportunity for American ranchers. And for Texas.

Because the Lone Star State ranks number one in cattle production. And with good grazing conditions across most of Texas, ranchers are continuing to expand their herds.

Things look much better now than they did in 2011—the time a stubborn multi-year drought got its start and the Texas cattle herd began to shrink to just above 11 million.

The favorable conditions have helped ranchers rebuild their herds, paving the way to greater U.S. beef supplies for the country and the world.

These beef export markets are a prime opportunity for Texas and American ranchers to find more customers and tables to fill.