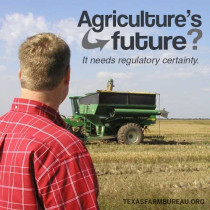 Regulatory certainty for farmers is necessary

How would you like coming to work with a big assignment due and discover that everything has changed? You have a new workstation. There’s a clueless new supervisor. There are new rules and new procedures. Then, a branch office across the country changes everything yet again. Could you do the job?

Farmers and ranchers have faced a situation very much like this. Congress approved a GMO labeling bill last year that put a nationwide rule book in place. This avoided a regulatory nightmare of patchwork decrees by states and even cities and counties.

Our own Texas Legislature flirted with delaying access to an EPA- approved chemical used to control wild hogs, but that bill was stopped in the Senate. The Legislature stepped up with a seed pre-emption bill. It prevents local governments from passing ordinances that interfere with the planting or cultivation of certain seeds and plants.

Our food system is in the hands of folks who know the rules and follow them. Regulatory certainty is respect for the job and the rules.