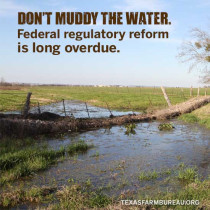 It never fails. When people in agriculture and business talk about regulatory reform, it’s always portrayed by some as a full blown attack on the environment.

No one suggests that agriculture should not be regulated, even aggressively. Farmers and ranchers use the environment to grow food for us and that will always interest the public.

However, a line has been crossed. The EPA’s hyper-aggressive Waters of the United States (WOTUS) rule, now on hold, is a case in point.

WOTUS has nothing to do with clean water, but extends EPA’s already powerful grip on agriculture. Five-figure per day fines, coupled with arbitrary and confusing rules, are a disastrous mix.

The proposed Regulatory Accountability Act requires federal agencies to be more accountable and transparent in rule-making. It would, among other things, demand more transparency and a cost-benefit analysis.

The act would also prohibit agencies from engaging in social media and PR campaigns to influence the rule making process—as EPA did during WOTUS.