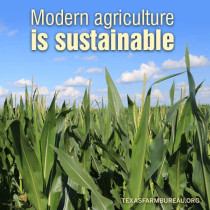 Farmers used to recoil when they heard the word “sustainability.” Perhaps that was because it often came with an attack on modern agriculture. Now, farmers and ranchers have learned they have a very good story to tell.

When the Dannon Yogurt folks announced they were rejecting GMO technology in the name of sustainability, they heard from a lot of farmers.

It said, in part, that the company’s policy “is the exact opposite of the sustainable agriculture that you claim to be seeking. Your pledge would force farmers to abandon safe, sustainable farming practices that have enhanced farm productivity over the last 20 years, while greatly reducing the carbon footprint of American agriculture.” Strong words that have the advantage of being true.

Corporate America sometimes has a short attention span when it comes to marketing. Stepping away from proven science and practices often means a step backward.