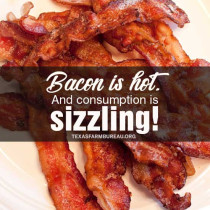 It’s a great time to be in the bacon business.

Americans are in something of a feeding frenzy over bacon. A story in the Wall Street Journal says that demand has pushed pork belly prices up by about 80 percent this year alone. Nielsen research reports that we bought 14 percent more bacon last year than three years earlier.

I defer to no one in my love of bacon. For breakfast, I’m more likely to eat sausage with my over medium egg, but bacon is so wonderfully versatile. It’s great for breakfast. How about on a cheeseburger? Mixed in the crock pot with carefully seasoned pinto beans? Now you’re talking.

Some aficionados of bacon refer to it as meat candy. I won’t argue with that. It also seems to be true that many health experts are pulling back on the dire warnings about fatty meats that were common not long ago.

Some say that bacon is still a bit of a guilty pleasure. You can over eat anything. I’ll try not to overdo it, but I’m up for the guilt a few times a month.