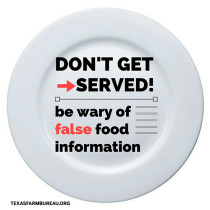 Twitter is a handy source of information and expressing ideas, but making decisions based on it is not always a good idea.

For instance, a tweet of the science-challenged Panera company recently got a well-deserved roasting on social media. Panera tweeted that sodium benzoate, a commonly used preservative, should not be in food because it’s also in fireworks. Not only does the preservative have a pretty good track record, it also occurs naturally in some fruits—Mother Nature’s own natural preservative.

You can stir up a Twitter storm over high fructose corn syrup, leaving out the fact that refined sugar of any kind is still just sugar. Most health organizations and the government want you to cut back on that, regardless of the source.

It might occur to you that 140 characters are not enough on which to base important decisions, especially those about food.

And for food companies, information is good, as long as it’s meant to inform—not promote fear.