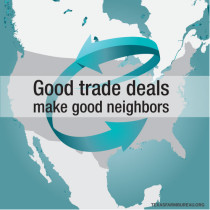 NAFTA: A good thing made better?

The North American Free Trade Agreement, or NAFTA, remains one of those really good ways to start an argument. Has it been good or bad for the economy? The evidence suggests mostly good for Texas and especially for agriculture. Doing away with it would be economic folly, but it might be improved.

NAFTA is a trade partnership between the U.S., Canada and Mexico. Since 1994, agricultural sales to Mexico and Canada have about quadrupled. Major exports include corn, beef, grain sorghum, soybeans and others. U.S. farm exports to Canada and Mexico have grown 156 percent.

U.S. grocery prices would be higher without tariff-free imports from Mexico. Imports of oil from both Canada and Mexico moderate fuel prices.

After more than 20 years of NAFTA, the Trump administration is renegotiating. All three nations could benefit from that.

Free and fair trade is critical to economic health and growth. Tweak it? Sure, but with great care.