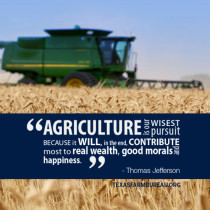 There’s a narrative on the Internet that calls agriculture the greatest blunder in the history of the human race. It theorizes agriculture is at fault for most of the world’s ills—from disease to despotism.

Like most theoretical pondering, it is a pointless exercise. Early humans were not at the top of the food chain. Natural selection punished hunting and gathering failures. Agriculture was the solution.

Growing food meant an upper hand in the desperate game of survival. Early humans spent all their time searching for food. Hunting and gathering was tough and unforgiving. Then, someone planted a few of those seeds and meals became more certain. Keeping animals meant a more reliable source of protein and clothing.

Agriculture freed humankind from the uncertainty of the next meal, leaving time for other pursuits. Would a much smaller population of hunter-gatherers have time to invent the printing press, vaccinations or the smart phone?

Agriculture is the human achievement that made virtually all the rest possible.