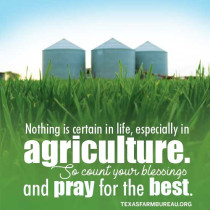 2017 was a tough year for Texas agriculture

A lot of Texas farmers and ranchers will be glad to see 2017 in the rear view mirror. It was a tough year. The prices farmers received trended at or below the cost of production.

Mother Nature added to the misery with some of the most severe natural disasters in decades. In March, devastating wildfires swept across the Panhandle, destroying half a million acres of grasslands and claiming several lives.

August brought the landfall of Hurricane Harvey, killing more than 70 people and inflicting about $200 million dollars in damage to Gulf Coast farmers. Cotton, rice, soybeans and livestock were affected.

There was some good news. The regulatory burden on agriculture was dialed back somewhat, and the Bureau of Land Management backed off from claiming the land of farmers and ranchers on the Oklahoma-Texas border.

Nothing is certain in life, and that’s especially true for farmers and ranchers. But they hope 2018 will be better.