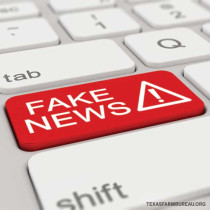 I’ll let you define it for yourself, but I submit that agriculture has a fake news problem. The anti-agriculture tribe has produced a lot of it. It’s even more prolific than wild hogs in Texas.

A crushing weight of evidence is almost always on agriculture’s side. Name the topic: GMOs, food safety, agricultural chemicals, clean water, corporate farming and more. Reporters often get it right, sometimes not, but fake news is widely manufactured and spread on the Internet. Cherry-picking evidence, leaving out inconvenient facts or just inventing claims out of whole cloth are examples.

An avalanche of fake news about agriculture is only a click away.

Americans enjoy the safest, most plentiful and most affordable food supply the world has ever known. Everything else is mostly just fake news.